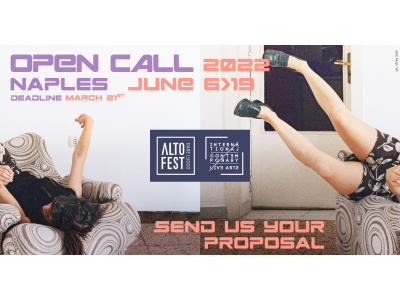 
Altofest was born in 2011 as an act of resistance, both artistic and political. The aim is to GIVE RISE TO a community based on the "poetic citizenship" principle. It calls to dialogue all the social components of the human-urban fabric in which it is grafted. It acts as a semantic interference in everyday life, allowing its inhabitants to speak to each other in a neutral language and meet in a shared risk space, daring together in a common space.

Altofest moves away from the function of mere "production" or "programming" of performances and artistic works, usually attributed to festivals, to become a space for experimental sociality.

Teatringestazione conceives Altofest as a live performance system, extended in time and space, shared with artists and authors from different disciplines, invited to question their works, in a public and collective way, through a translation process for the domestic space.

Through Altofest, we want to radically question ourselves on the need to generate new values constantly, to redesign the relationship with places, to subvert the use of spaces and the established attribution of roles, to dare to cross borders (of gender, of discipline, of competence, of action) that have never been attempted before.

For this reason, when choosing the proposals to send us, we invite the artists not to be influenced by the thought of easy adaptability of the work. On the contrary, the opportunity Altofest offers is to rework the performance, structure, essence, and direction to the domestic place and the relationships that cross and define it.

The artists are invited for an artistic residency to process the selected work. The work will then be open to the public during the programming days following the residency.

The artist's stay is required for the entire Altofest period, for two weeks.
Altofest guarantees accommodation with the use of a kitchen, a production grant, and additional technical and human resources under the terms specified in the regulations in the attachment to this call.

Applications may include one or more original and finished work, conceived for a formal space, already performed in front of an audience. Archived or repertory works that are to be reactivated are also eligible. The theme, content and duration are free. The proposed works must belong to live art (theatre, dance, performance, experimental and interdisciplinary formats). Incomplete performance projects or those still in the study or creation phase are excluded.

Professional artists can apply from all over the world, with no distinction among nationality, country of residence, language or age. Unfortunately, amateur groups cannot apply.

To apply, please READ the REGULATIONS send proposals by filling out the online form on this link: https://forms.gle/uiy5mhek9PC3gqpU9

You declare that you have read and unconditionally accept the regulations attached to the call for proposals by filling in the form.


The online application is the only way to send the artistic proposals for Altofest 2022.

Altofest was born in Naples in 2011, conceived and curated by TeatrInGestAzione, directed by Gesualdi | Trono, in dialogue with Loretta Mesiti.

Awarded by the EFA (European Festival Association) with the EFFE AWARD 2017-18 (Europe for Festivals Festivals for Europe), as one of the six best festivals in Europe. In 2018 it was included as a best practice in the annual report "I am Culture 2018", edited by Fondazione Symbola. Also, in 2018, the Italian Ministry of Cultural assigned it the label "European Year of Heritage". Winner of the Funder35 calls (2016); SIAE-Sillumina (2017); Allianz Kulturstiftung (2019). In 2018 Altofest left the borders of Naples for the first time, inaugurating a series of special editions, commissioned by several European Capitals of Culture: Altofest Malta 2018 for Valletta 2018 ECoC; Altofest Matera-Basilicata 2019 for Matera 2019 ECoC; while a re-edition for Valletta, commissioned by the Valletta Cultural Agency, is already in preparation for 2022. It is also included in the candidacy dossiers of Kaunas 2022 and Trenčín 2026, acting as a de facto connector of a "spontaneous" network among the cities sharing this title. Altofest is also an indicator of the cultural interest of the city of Naples in the Cultural and Creative Cities Monitor tool of the European Commission.